One of the more under-the-radar features of the story of Jesus’ birth is the reality that Mary and Joseph had to flee their home country to protect Jesus from the violence of Herod’s regime.

nd their baby Jesus recapitulated the story of their own people fleeing Egypt. Seeking asylum has been the plight of many people who sought to follow the way of God.

Recall for a moment the reality of Joseph and Mary’s refugee experience. Herod, the ruler of Palestine, a self-protective powermonger

who made himself king, heavily taxed the people to build the temple and gain favour with the Jewish people – only to be become public enemy number one by the end of his rule. Before his imminent death, he ordered that certain nobles of Jerusalem be put to death so there would be mourning when he died. Herod was an oppressor.

So when Herod gets word that there is a boy born with kingly notions around him, he sends the Magi searching for the child to let him know when they find him – so he can eliminate him.

When these wise men are warned in a dream not to return to Herod, he realizes his plan has not worked out as he intended and carries out a brutal abuse of power.

Herod, when he realized that the scholars had tricked him, flew into a rage. He commanded the murder of every little boy two years old and under who lived in Bethlehem and its surrounding hills. – Matthew 2:16

All of which leads Mary and Joseph to take flight to Egypt as political refugees from this tyrant ruler.

According to the United Nations Refugee Agency, more than 103 million people have been displaced from their homes. While just over half of those are internally displaced within their own countries, more than 32 million have fled their countries – and are now in refugee camps or in transit.

Five million of these are in a different nation right now seeking asylum. This year alone, more than 70,000 asylum seekers will arrive in Canada asking for refugee protection

The role of the church 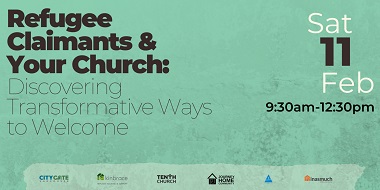 From its earliest days, the church has provided care and safety for people seeking refuge. From the Old Testament “cities of refuge” (Deuteronomy 19) to caring “for widows and orphans” in the early church (in James 1:27, for example) – and in the brightest moments of church history – people seeking to follow God’s call on their lives have cared for people seeking asylum.

We are privileged in Metro Vancouver to have a number of organizations like Kinbrace, Journey Home, the Christian Reformed Church and Inasmuch that have been faithfully supporting asylum seekers for many years.

These organizations have learned a considerable amount about healthy engagement with people seeking refuge and have developed a host of best practices. We also have many churches in the Lower Mainland who have sponsored refugees and have advocated for and supported asylum seekers.

For details on ‘Refugee Claimants & Your Church,’ go to the CityGate website where you can find registration information.

The learning on this day will be very concrete and practical. I believe this gathering can both initiate those churches that are new to involvement with refugee claimants and deepen the practice of those who are further along.

By learning together with people who have lived through the refugee claimant experience, from those welcoming churches and from frontline communities engaging asylum seekers, your church will have an opportunity to both enlarge your imagination and to build your capacity for accompanying refugee claimants.

As we enter into the Advent and Christmas seasons, we once again are invited – and challenged – to live in solidarity with our Saviour. We are called to join in solidarity with Jesus by joining the millions since his day who have been forced to flee their homeland.

What better way to celebrate Christmas and join in solidarity with Jesus than by befriending those who, like Jesus, have fled oppression in their homeland? If you do, this could be one of your best Christmases ever!

This article was also published in ChurchforVancouver

Tim Dickau was the pastor of Grandview church in Vancouver for 30 years. During that time, the church went from being ready to dissolve to becoming re-established as a force for good in its neighbourhood. In the last three decades, the church has found creative ways to bear witness to the good news of God’s reconciling and restoring love through community living, welcome of the poor and the stranger, economic development through social enterprises, a 26 unit community housing project, proliferation of the arts, prophetic witness and deepening practices of confession and repentance. One way of describing this transition is to say they have moved from “going to church to being the church…in and for the neighbourhood.” Tim is the author of Plunging into the Kingdom Way and Forming Christian Community in a Secular Age: Recovering Humility and Hope). In addition to his role as director of CityGate, Tim has also embarked on a new venture as the leader of the certificate in missional leadership with the Center for Missional Leadership at St. Andrews Hall on the UBC campus. Tim is married to Mary, who serves as the Chaplain at Beulah Garden Homes. They have three adult sons, two daughter-in-laws and one grandson. They have lived with thirty-seven people over the last thirty years.