I cannot make this up

I cannot make this up. On Sunday when we arrived at church, some 45 minutes before the service was about to start, I saw a camp made up with tarps and umbrellas and items of clothing before the white doors at the side of our church. Not an uncommon sight in this neck of the hood.

It was at a fire escape door, so I could not just let them be. I walked up to the tent and said “good morning” to whoever was hiding underneath. I heard the word “Gabriel” as a first utterance from underneath.

A tarp was pulled aside, and I recognized the face of Corey, one of the regular guests who overnight on our doorsteps. Next to him sat a woman who also looked vaguely familiar and introduced herself as Alexandra (if I heard her correctly). She was friendly and I tried to be friendly. 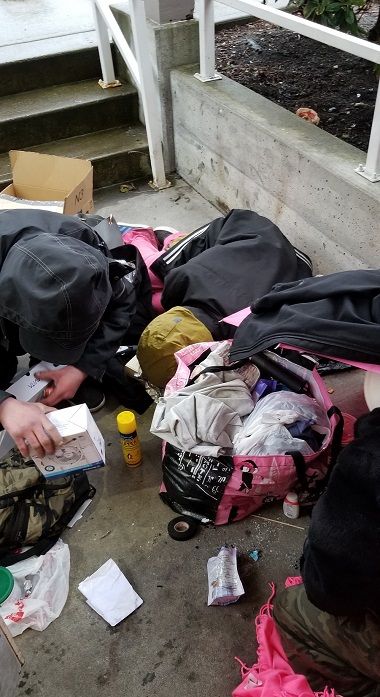 I asked them about their night and everything. I told them to please pack up before the bulk of the people arrived and explained to them that they are a fire hazard sitting where they sat.

The women smiled at me, revealing a set of meth damaged teeth. Still the smile was beautiful. She asked me what kind of church we were. I said we are an ordinary, warm and welcoming church.

I know how this works. It’s not necessarily that she isn’t serious or doesn’t really want to come. It’s the feeling of unworthiness and shame and guilt that will haunt her as she approaches the very threshold. Even thinking about it might just be too much. I was 100 percent convinced she wouldn’t come.

Ten minutes before the service was to start, they were still there. Every pastor will tell you that 10 minutes before a service starts you as a pastor is at your most vulnerable and insecure, acutely aware that the task before you is really too great for you as an imperfect human being, doubting yet anxiously hopeful that God will carry you through it.

I went up to them and very firmly told them that they were not working with me. After a reprimanding sermonette, I smiled and said: “But you are still welcome to come! But please break down the camp whether you do or not.”

The service started. In my sermon introduction, I happen to address the theme of thresholds and how we need help crossing them. I told the story of Alexandra who just asked me this morning if she could attend. I told them I knew she would not show as I knew the threshold barrier would be too much for her.

And then, as if it was some prearranged conspiracy to show what little faith the pastor had in his fellow man, Alexandra walked into church. Her partner joined her. At first, I didn’t quite recognize her.

I preached about John 13 and Jesus’s ‘new’ commandment to love one another. I spoke about Dostoevsky’s Alyosha in The Brothers Karamazov, who quipped that it is easier to love all people in the world generically than it is to love a single human being specifically.

I spoke about how many people claim they love ‘the homeless,’ yet don’t know the name or story of even one homeless person. Alexandra’s gangster-looking partner, on taking my words in . . . his mouth literally fell open. Then he smiled broadly and looked around, presumably to see how my congregants were going to storm the pulpit and take me down violently. They didn’t and again his mouth fell open.

It was hard to focus on my words while I witnessed this man having his perceptions shifted and his mind blown. It felt like something very holy was happening in our church that morning.

When I closed my sermon, I looked at the couple and said something along the lines of: “Good job you two for crossing the threshold to join us this morning! It must have taken so much courage. I admire that.”

I could hardly pray after my sermon, being so emotionally overwhelmed about this God moment. Afterwards people spoke to them. I didn’t see anybody giving them a cold shoulder. A congregant who happens to be the director of a big mission agency in Surrey went up to them and informed them about available help for shelter and treatment. Others invited them for coffee downstairs. People enjoyed their being with us more than trying to help or fix them.

Initially I was a bit perplexed at how my invitation could have moved them to cross this threshold, one I know is like a 10 foot spiked barrier for people in their position. Then I learned it wasn’t only my invitation that did the trick.

An elder told me that when we did our passing of the peace, he felt compelled to go outside and invite the same people in – blissfully unaware of my interaction with them earlier. They accepted.

Alexandra, however, went into the washroom and disappeared for a suspicious amount of time. The elder asked my wife, who taught Sunday school next door to check in on her. She found her at the wash basin, not shooting up drugs but washing herself frantically to get clean before she joined. She eventually made her way upstairs and walked in at that exact moment in my sermon.

I am reading a book from Andrew Root that goes into the back story about the great theologian Karl Barth. It tells how he was profoundly influenced by a pastor with a very simple ministry. He noticed something different in him.

He was well versed theologically, but he came across not as one who explains God, but as one who seeks to encounter God with his people. Barth saw in his church an absence of an obsession with being relevant by either being trendy or eloquent or politically woke and aware.

An openness to encounter God breaking in graciously and revealing Himself anew to people stuck in an immanent frame of givenness – it shaped everything Barth would write later about God. It made him put a theology on the table that held that God is das Ganz Andere (the wholly Different One), a God we cannot find, frame or explain as sinful human beings, but a God who reveals Himself to us in surprising ways.

The life of the church, he said, lies in it departing from an obsession with survival and growth and instead focusing on God (revealing Himself to us) and the broken world that He sent His Son to because He loves it. This stretches you. To embrace this call is to live in tension and seeming contradictions in a world that turned its back on God. And yet, it is also the way to be most fully alive as his church.

After what I experienced that morning, I think I get what Karl Barth was trying to say. Despite my theological education and careful weekly sermon prep, I cannot claim to understand and be able to explain this God.

But with fellow believers and by his grace I can open myself up to encounter and intimately know the God who time and again finds me and finds people . . . and brings them together in unity.

And darn, I would not trade this adventure for the world! 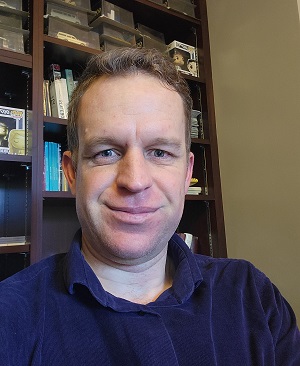 Gabriel Snyman is the minister of City Centre Church a missionally oriented Presbyterian Church in Whalley (Surrey). He is on a quest to learn with his congregation what it means to wait expectantly for God and recognizing Him, breaking through the givenness of a secular context in hopeful, surprising and gracious ways.