We probably shouldn’t have communion online

I had to be away from my regular Sunday preaching gig recently. I missed my people, but I’m not sure I missed presiding over communion with them.

It was the first Sunday of the month, a day when many Protestant communions celebrate the Lord’s Supper. I’ve been pastoring there since October, a time entirely under Covid lockdown, and so entirely online.

As far as I know, my parishioners are only heads on screens. We have only ever communed together online. And I have real reservations about this.

The earliest Christians celebrated the Lord’s Supper because Jesus commands us to do so. He makes a series of strange promises during his last meal with his friends.

The bread is his body. The wine is his blood. We are charged to “do this in remembrance of me,” one of history’s simplest-seeming commands about which Christians have, naturally, argued incessantly ever since.

Why exactly? What’s happening in this simple meal?

I remember overhearing some schoolkids visiting a church, clearly unfamiliar with the place, and one saying to another, “This is where they think it becomes the actual body and blood of Christ.” The other asked the perfect question: “How?!”

You could tell the whole history of the church, in all its sordidness and glory, based on that question.

I couldn’t help myself. When else is a theologian of any use if not then? I interjected: “We don’t know. But it’s cool right?” I wish I’d have had the gumption to add, “Come and eat with me, would you?”

My church’s great founder, John Wesley, spoke of the eucharist as a converting ordinance. You can meet Jesus there for the first time. It won’t be the last.

Christians don’t know exactly what takes place in this meal. We do know our Lord promises to meet us as we eat together. Our language takes on some of its most dizzying mystical heights at this point.

My guy St. Augustine says the eucharist works backwards from ordinary meals. Usually we eat something, digest it, and it becomes part of our body. But at this table we eat, and it digests us, and transfigures us into the body of Christ.

In ways beyond our understanding this is a table that extends in time. The bites eaten here continue in a meal that is a feast for all peoples. And to listen carefully to Jesus, at his table the first are last, the hungry are fed, and the rich go away empty. This is not a safe meal. It’s holy. And every religion draws boundaries around what is holy. Not to do so is like allowing people to approach a live volcano without warning.

So how does all that work online? I have no idea! But as you can tell we Christians have no idea how it works ordinarily.

Don’t let Roman Catholics tell you different. They trust that God miraculously transforms the elements of bread and wine into the body and blood of Christ, and they use some Aristotelian language filtered through Aquinas to explain it, but they can’t prove it, any more than we religious types can prove much of anything. Takes faith yo.

My Methodist tradition trusts too, we just don’t provide a philosophical explanation. Better to adore than explain at this point. Anglicans insist you have to be baptized to take the meal. My guy Wesley was Anglican too – he just thought sometimes intimacy can come before marriage, and that’s fine if it’s solemnized after the fact. Are you really going to tell Jesus what he can and cannot do?!

There are Christians for whom these actions are entirely symbolic. This is a minor ritual in which we remember Jesus’ death, and feel really really badly. To be rude for a moment, this is a sort of funeral for Jesus. So a bite of bread and a sip of wine hardly matter. The material almost gets in the way. If that’s one’s view of communion, I can hardly tell why we celebrate it at all, whether on the computer or not.

There are Christians for whom there is no worship without the eucharist. Roman Catholics haven’t really been to church without feasting on Christ, drinking him in. I have more sympathy here, and am moved by accounts of eucharistic piety that will even defy laws to meet Christ at his table.

We have not had reports of Covid spreading at the Lord’s Supper. Churches tend to be full of rule followers, sometimes to my chagrin I confess. And this is a meal, tradition teaches, that conveys health, life, immortality even. One friend converted to Roman Catholicism simply, she said, “because I wanted the wafer.” I can’t argue.

I also can’t join her. Not at present. The communion table, Jesus’ means to make believers one, has been a sign of the church’s brokenness and contradiction at least since the Reformation of the 16th century. Protestants and Catholics have been more likely to make war than to unite at the Lord’s Table, and this is a scandal.

Perhaps we have not really been celebrating the Lord’s Supper since we broke communion with one another over doctrine in the 16th century. Then again, to read the Bible, maybe every communion is a sign of disunity if it excludes the poor, the enemy, the outcast. These are the guests of honour at Jesus’ table.

As you can tell, there is more going on at this table than anyone can fathom. It is a place of salvation, of betrayal, of scandal and redemption. I want to eat there with everyone I love. The people I don’t love, Christ is trying to show me, are also his beloved. He wants to eat with them too, and so I’m bound to invite them. People I count as my enemies, and there are a few, he teaches are also himself. They are him working incognito, transforming me and them alike from enemies into friends.

We have stories of heaven being a place where everyone feasts unendingly. Hell is the same table, with folks starving. They refuse to serve one another. Heaven is a feast in which you’re only ever fed by others, and the joy is in giving life away.

How much of this comes through on Zoom? Very little I fear. We go to our cupboards and come back with bread. We prepare something to drink in advance as well. I hope it’s actual bread, real wine, though the church often debates what counts for both of those things even in “normal” times.

I pray and we eat and I trust Christ meets us. But does it have anything like the resonance I describe above? I’m dubious.

But then again, if we had any idea what was really happening at this table, where the risen Jesus meets us and transfigures us from enemies into friends on the way to renewing the whole creation, would we ever dare approach it at all?

This article is also published in Church for Vancouver. 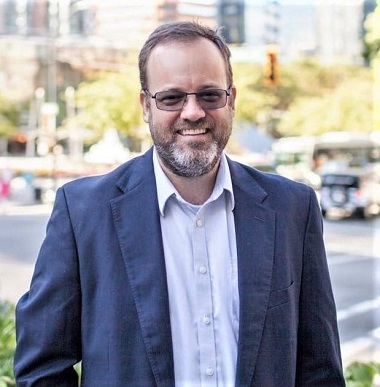 teaches preaching at the Vancouver School of Theology. His and Andria Irwin’s forthcoming book on these matters is called Following: Embodied Discipleship in a Digital Age (Baker Academic).

The way the story was recounted to me, the veteran wore his pain lines like a medal of bravery. A stalwart member of the congregation, he sat in the pews with his wife each Sunday bearing a quiet authority that told his story before he ever opened his mouth.